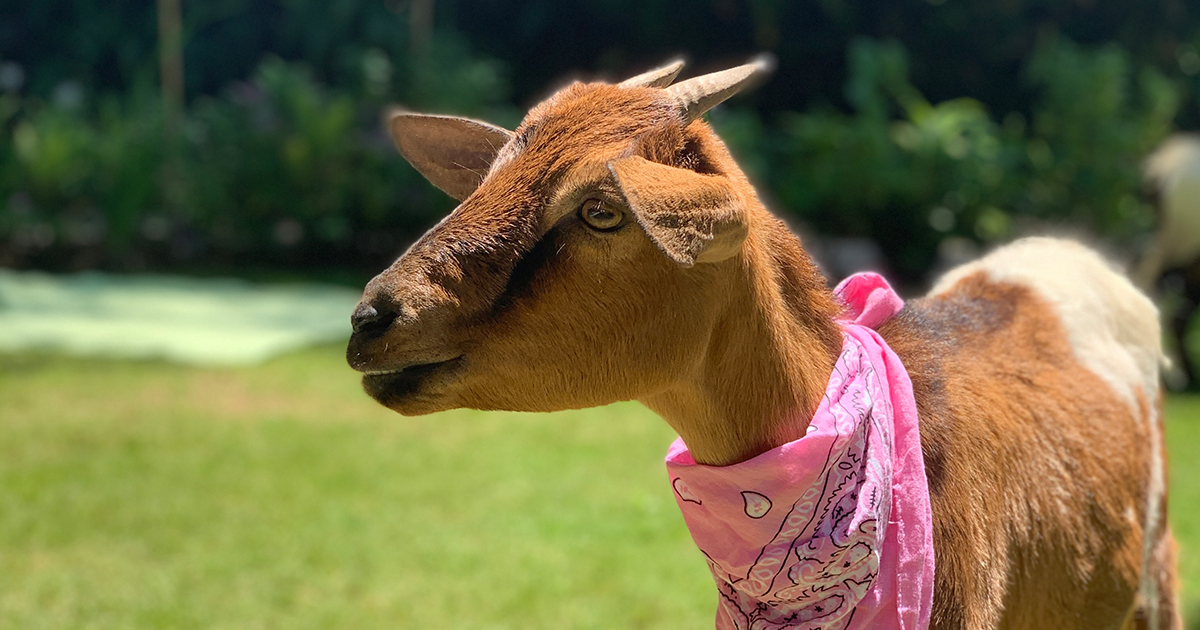 Sunset at the Palms, an all-inclusive resort in Negril, has been providing a romantic and relaxing haven for human guests for 15 years. In recent years, though, it’s earned a reputation as being a happy place for goats, too, thanks to a four-legged member of the groundskeeping crew, Betty, who arrived in spring 2017 and has since found a beau, been married in a formal resort ceremony, and given birth to twins … twice.

On September 12 the second set of those twins were gifted to two members of the Sunset at the Palms staff, who will take them to their own homes and continue the resort’s commitment to the Green Globe initiative. The resort attained its Green Globe certification in 2017 and adopted Betty as part of that process, through a partnership with a local pig and goat farmer whose animals consume much of the resort’s kitchen scraps.

Resort guests and staff, including the entire groundskeeping crew (the department the goats are assigned to), were on hand for the send-off of the kids, who from their birth last November 9 were earmarked to leave the resort when they were old enough to join or start other herds. 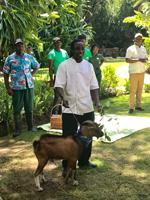 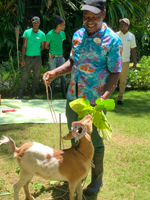 The two employees who received the goats have played integral parts in the goats’ lives since the inception of the program. Basil Grant is the groundskeeper who has worked with the goat family most closely since Betty joined the resort’s team, ensuring their safety, comfort and good health. Junical Bruce, a member of the culinary team, has plenty of experience with goat herding and took an active interest in the resort’s growing herd right from the start. Basil has built a home for the female, whom he nicknamed “Perfect Girl,” at his house and will work on starting her own herd; Junical will take the male to join the 35 goats he already has at home.

Goats are an important part of the island’s culture, and many Jamaicans own at least one. Betty is a cross between Jamaica’s local goat species and a British breed called the Anglo-Nubian. The breed originated about 100 years ago, when the Brits cross-bred their own goats with a population of goats that had been imported from India, the Middle East and North Africa.

Nubian goats thrive in hot climates, and the Jamaican government is working on a special breeding program to improve the genetic pool for goats across the island.

In case you’re inclined to point out that goats often end up on the dinner table – and that one is going home with a chef — we’ll assure you that Betty and her entire family will be spared that fate, no matter where they live.

Betty’s original offspring, Bella and Bill, will remain at the resort with their mom and dad, Royal Brown. There’s already another baby in the mix and Betty is pregnant … again. That means that the program will continue on and on, with more members of the staff “earning” goats along the way and taking them to their own homes and farms to keep the process going.

Sunset at the Palms’ guests can interact with the resort’s herd during weekly nature tours, on which a member of the groundskeeping crew guides visitors through the lush resort and points out all the flora and fauna that help make it such a tropical paradise. Of course, the most popular fauna come in the form of the ever-increasing goat population.