Have You “Herd” the News? Adults-Only Resort in Jamaica Does It Again, Welcoming Two More Kid 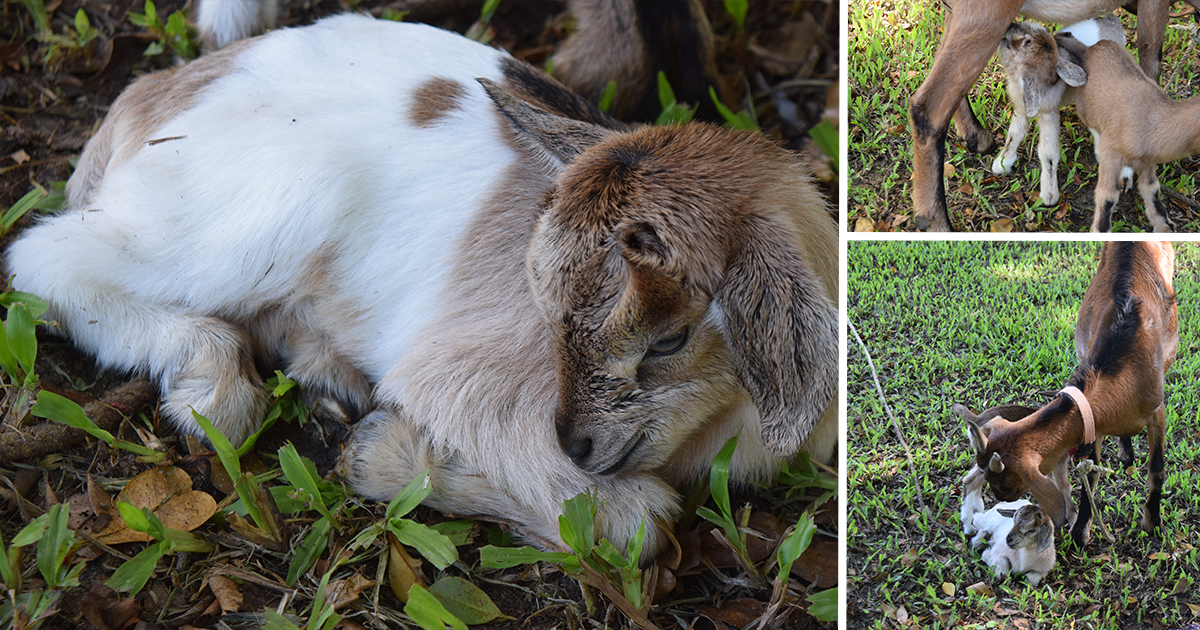 Sunset at the Palms, has gained international media attention during the past 18 months for introducing the traveling public to a captivating family of resident goats led by a friendly matriarch named Betty. On November 9 Betty delighted resort staff and guests by delivering her second pair of twins in less than a year. Like the first set, the new arrivals are a boy and a girl. The babies are in great spirits and health, as are their parents and older siblings, and the little ones are carrying on the tradition of being a part of a select group of “kids” allowed at the adults-only resort.

It all began with Betty, a young goat who arrived at Sunset at the Palms in the spring of 2017 as part of an exchange with a local farmer. She immediately won over staff and guests alike with her extroverted personality and doglike antics. Betty became an official part of the groundskeeping crew at the resort, which offers 85 treehouse-style rooms in a lush jungle environment plus a beautiful beach, and where she spent her days chomping on greenery and greeting participants on the resort’s weekly nature tours. After a few months she became Sunset at the Palms’ official hostess, with guests clamoring for the opportunity to join her for a picnic lunch (they get sandwiches, she gets fruits and veggies). Around the same time, a second goat, Royal Brown, joined the party. He’s shy and reserved, but you know what they say about opposites attracting … and he and Betty quickly became a couple. To the delight of guests, the resort hosted a full-fledged wedding for the pair last fall – just in time, it turns out, because Betty delivered her first set of twins just a few weeks later.

Now the original twins, Bella and Bill, will assume some of their mom’s hosting duties while Betty takes care of the newborns and focuses renewed attention on her groundskeeping responsibilities. The firstborns will accompany guests on picnics and greet VIPs for another few months, and then they’ll likely move to Murdock’s Farm, where much of the resort’s produce is sourced and where Sunset at the Palms will begin running special excursions in the new year. During those tours, guests will have the opportunity to see Jamaica’s unique growing conditions and meet Milton Murdock, the third-generation farmer who supplies the island’s top restaurants and resorts. In the future, the second set of twins and subsequent baby goats will be adopted by members of the resort staff, who will welcome the young goats to their homes.

Goats are an important part of the island’s culture, and many Jamaicans own at least one. Betty is a cross between Jamaica’s local goat species and a British breed called the Anglo-Nubian. The breed originated about 100 years ago, when the Brits cross-bred their own goats with a population of goats that had been imported from India, the Middle East and North Africa. Nubian goats thrive in hot climates, and the Jamaican government is working on a special breeding program as a way to improve the genetic pool for goats across the island. (In case you’re inclined to point out that goats often end up on the dinner table, we’ll assure you that Betty and her offspring are beloved and will be spared that fate.)