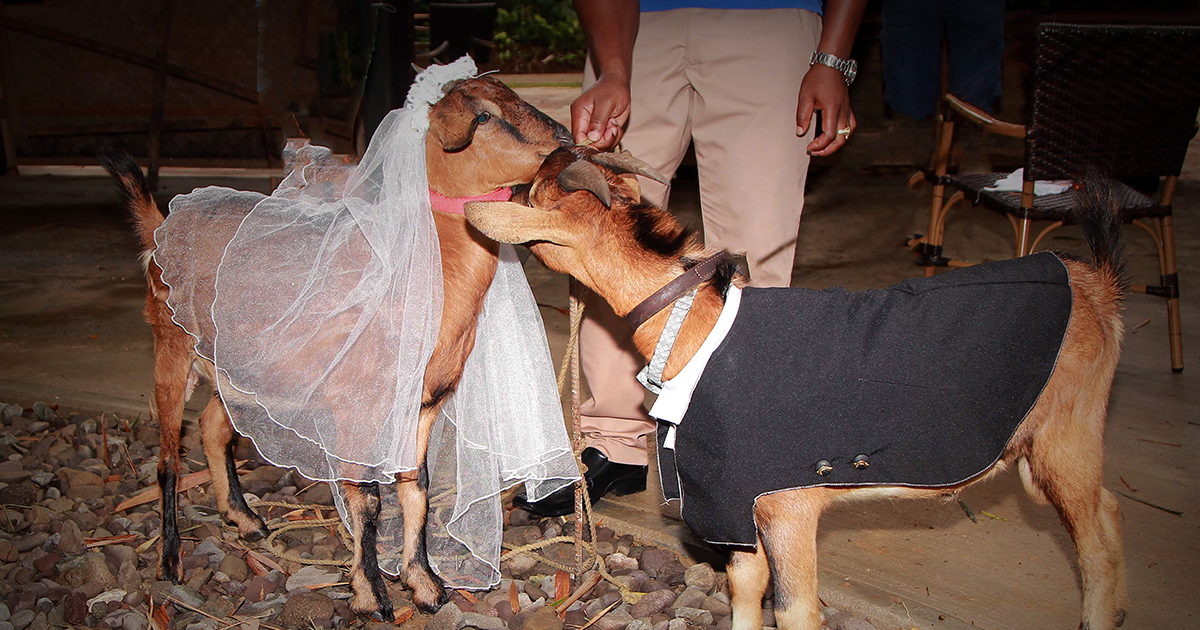 The management and staff of Sunset at the Palms, an all-inclusive, adults-only resort in Negril, Jamaica, proudly announces the marriage of two of the property’s most recent hires, Betty and Royal Brown. The pair of goats, who are official members of the resort’s grounds keeping crew, met on the job earlier this year. After a whirlwind romance, they officially tied the knot on Saturday, November 25 during a garden ceremony attended by their coworkers and resort guests.

Betty generated much attention this past spring, when she first arrived at the resort. She excelled at her duties of keeping grass, weeds and other plants properly trimmed (by gnawing on them), but she also became the highlight of the resort’s weekly nature tours and soon found herself being invited to many of the human wedding ceremonies that take place here each week. Her sparkling personality eventually led to her becoming Sunset at the Palms’ official hostess, and now she accompanies guests on picnics that include two baskets of snacks – one for the humans and one for her – and a souvenir photo. She’s been the darling of both social and traditional media coverage …but she also caught someone else’s eye.

Over the summer, Betty was joined by Royal Brown, a young billy goat who proved that opposites truly can attract. While Betty is more extroverted and even dog-like in her behavior, Royal Brown has a more reserved demeanor. Though this shy guy didn’t take to the spotlight quite like Betty, he did take to the nanny goat herself … and after a very brief courtship, the couple was engaged in mid-October. The big moment took place in the presence of Stacey-ann Munsie, who won the resort’s goat-naming contest and was rewarded with a three-night stay and a picnic with the pair. Ms. Munsie, who hails from St. Mary, Jamaica, participated in the naming contest via the resort’s Facebook page and settled on “Royal Brown” to pay homage to the hotel’s regal features and the color of the male goat.

Both Betty and Royal Brown celebrated their recent nuptials in style, just as countless human couples do here each year. The event took place among the flowers, trees and other foliage for which the resort is so famous. The bride wore a flowing veil and the groom donned a custom-designed tuxedo jacket and bow tie. The pair was surrounded by local greenery, which (being goats) they ate following the ceremony. 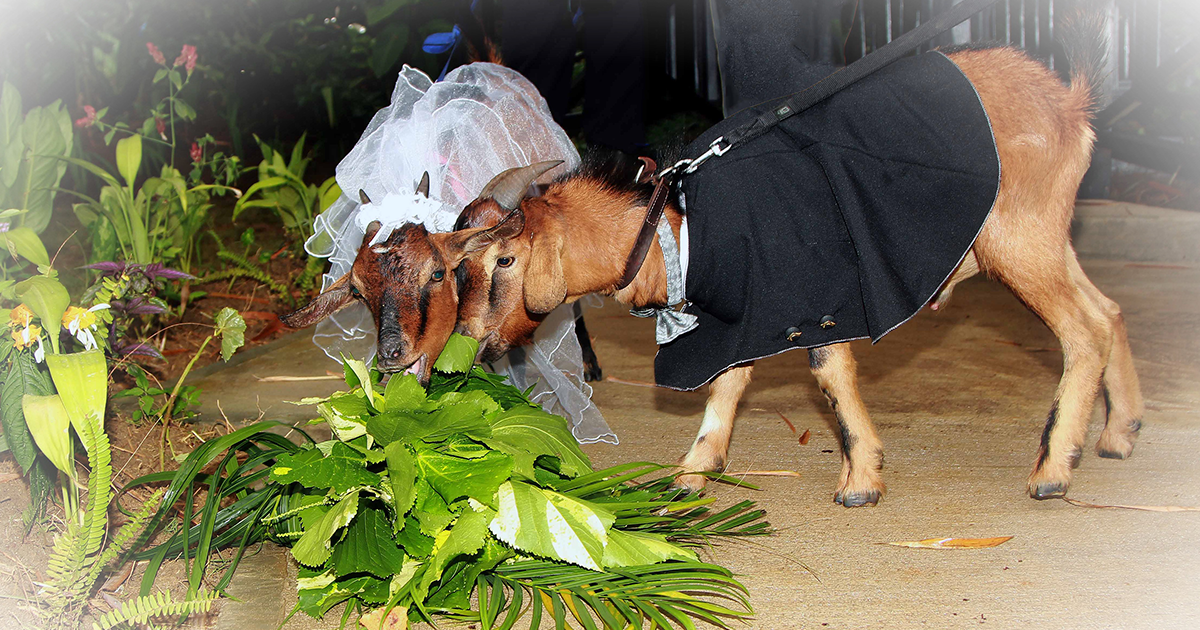 The couple skipped the traditional post-wedding getaway, preferring to remain on site at Sunset at the Palms, which insiders say is like a honeymoon every day for them. The pair has been spending an increasing amount of time together and Betty has gained a little weight in recent weeks, so it’s suspected that a baby goat may soon be on its way. No kidding. (Goat pun intended.)

For more information about Sunset at the Palms or to plan your own (human) wedding ceremony at the resort, please visit www.thepalmsjamaica.com.